My end of my full-time skirt-wearing season

When I started this blog 5 years ago I had just started wearing skirts full-time. I decided for several reasons to begin doing this:
--I felt knee-length or longer skirts were more modestly covering that crotch and bum-hugging pants
--Skirts helped me feel more feminine and reminded me of the beauty of femininity that the Lord created

I was coming out of a season of my life of great vanity, and I felt like wearing skirts pretty much full time really helped me to embrace the role of femininity vs the role of sexy that our society had me chasing before. Wearing skirts reminded me to act feminine, not just look feminine, and for me, that was a HUGE benefit. I learned a lot from wearing skirts full-time, mostly about controlling my vanity and embracing femininity in it purest form

But, I am no longer a full-time skirt wearer.

If you continue to wear skirts full-time, please don't think that this is a post trying to convince you to do otherwise. I've been meaning to write on this topic for a while, but wanted to make sure what I had to say came across the right way. I feel you all deserve an explanation over why I no longer blog about modesty or fashion. And while I have made this change, know that I respect, dearly love, and pray for all of you no matter what you choose to wear, skirts or otherwise.

I receive dozens of emails every month from readers of this blog, which I absolutely love (and I am sorry I am terrible at replying in a timely manner!). But it began to concern me that the number one topic that people wrote to me about was modesty, particularly asking for advice on whether of not they should begin wearing skirts all the time.

And while I completely understood and enjoyed that so many women were reaching out to me, I started feeling this nagging in the back of my mind that this blog had turned into something I didn't really intend for it to become. And THAT eventually made me realize that I had actually become something I hadn't intended in becoming.

This point was actually driven home one day when I was driving and listening to a paster I enjoy on the radio, and he talked about protestant legalism. In Protestantism, we believe that works have nothing to do with salvation, and that salvation from sin is a gift freely given by God to those who believe in him and the sacrifice that was made of Jesus Christ. This is in great contrast to many religions, including some who call themselves Christians, who believe that salvation is something that has to be earned despite what the Bible says in Romans 3:22-24:

And this righteousness from God comes through faith in Jesus Christ to all who believe. There is no distinction, for all have sinned and fall short of the glory of God, and are justified freely by His grace through the redemption that is in Christ Jesus

So when this pastor mentioned protestant legalism, or the idea that there are protestants who believe that law abiding has something to do with salvation, I was very disturbed. The idea actually became something I started praying about quite a bit, as I could sense God had something to teach me about it.

Over time I started seeing signs of this protestant legalism in ways that said something like "doing XYZ will not bring you salvation, but it is a sign that you are in fact saved and have the Holy Spirit guiding you". These things are almost always extra-biblical (although many like to pull out verses that may somehow be translated to give their claim validation), and some that I have begun noticing have things to do with dress style, worship style, or Bible version. So it becomes "if you are really saved and have the Holy spirit guiding you, you will worship like this/dress like this/wear this/not wear this/read only this Bible translation." If you happen to be a Christian and not fall into those lines, your Christianity might be thought to be inauthentic or immature due to your wearing pants, or having a tattoo, or listening to Christian rock, or reading the ESV bible version.

It is true that Christians will behave differently and separate themselves from this world, but I have come to believe that this differentiation has little to do with how you dress, but how you love. And it can become very difficult to portray love when you develop a narrow, unbiblical definition of what Christianity or Christians can or should look like. 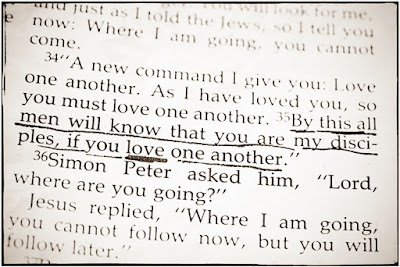 Don't get me wrong, I am against some of what has crept into churches, as it is corrupting the Bible message. But I've come to see that worship comes in all shapes and sizes, and I believe the Lord hears and honors all of it so long as it is honoring Him. There are Christians all over this planet with different ways of worshiping, dressing, behaving, and coming to the Lord, but the gospel message is universal and uniting.

And through all of this I've come to a place where I want to focus on the gospel and on being God's hands and feet, not on what I am or am not wearing. I came to a point where I realized that the only thing God has to say about my clothing in his word is that it be modest and feminine, and that is it. While some may believe that means only wearing skirts, I have come to believe that I can pull off both of those things in pants too.

The benefit of this is that I have become more approachable. I was never in-your-face about my skirt wearing, and most people didn't say anything about the fact that I wore only skirts. But I did get some questions. And I realized that wearing skirts exclusively made me less approachable by many people that God would want me to reach out to. That isn't to say I couldn't reach out in skirts, it just means that my exclusive skirt wearing made it seem in an un-said way that I believed skirts to be a part of my faith, and it became a divide between me and those I sought to reach. My exclusive skirt wearing completely unintentionally gave off the impression of protestant legalism, and that is simply not a part of the gospel.

I want more than anything to be God's hands and feet on this earth, and exclusive skirt wearing made my faith into a set of rules to those I was surrounded by, and that could not be further from the truth. But in that protestant legalism way, my skirt wearing was unintentionally telling people that although I am saved exclusively by Christ, he has lead me to wear skirts exclusively, and if he hasn't told YOU to do the same, then you somehow are not as close to Him as I am.

I said before that I hesitated for a long time to write this post, and I hope I am not completely messing up the message I am trying to get across. Do I still wear skirts? Yes! I love them! And they continue to make me feel very feminine. But I am also wearing pants and capris now and again too. I continue to dress modestly and femininely, but I am not confining myself to wearing skirts and dresses all the time. Modesty to me has taken on its simplest form: seeking not to bring un-due attention to myself.

I have deleted some posts from this blog concerning skirt wearing simply because I don't want to misguide those seeking answers. If someone is confused and seeking answers in this area, they should get those answers from God's word and through prayer, not through the persuasive writing of me or any other blogger or writer. But more than anything, I hope that these people will receive the gospel and begin an amazing love affair with our wonderous God. Skirts mean nothing next to that.

I want to end this post with the thought that ultimately moved my heart regarding all of this: If God's followers would spend less time worrying about the right and wrong of their fashion choices, and more time loving on the broken and making disciples, just imagine what this world could look like?
Posted by Amy Joy at 10:52 PM

I love to fellowship with others and hear what they have to say. I would ask, however, that you be mindful of what you write and try to be uplifting and respectful. Thank you for sharing!